In response to Chuck Wendig’s recent Flash Fiction Challenge: The Dragon, here’s a short story inspired on his prompt.

As she walked past the threshold she heard the characteristic sound of colliding beads. A whiff of cold damp air spanked her face. Ugh. The place smelled like yesterday’s fart. What am I doing here? she wondered. For the past week she’d been dreaming about the old building. She figured it was just her mind reliving old memories, but something felt different in the dreams. Perhaps it was the size of things. The last time she’d been into the Dragon’s Den she was 8 years old and in her memory, things were bigger, but in the dreams it felt like she was older, visiting the old “entertainment” spot as a customer, not the main attraction.

Why am I dreaming about this place now? The question burned her insides. She had relived nightmares over and over again and had long said goodbye to them and now, over a decade later, the place had come back to her like a haunt, demanding that her subconscious pay attention. Breathing through her mouth, she ignored the nausea that threatened to rise from her gut and belch all over the place. Nobody would mind anyway, so fuck it.

She had to hand it to the old place. Even after all these years, the flooding, and the fire, the den still had its charm. The red walls were now charred black, but an occasional glimpse of the original color peeked from behind old bricks bringing back the sense of oriental mystery that had been so characteristic. In the back, there was still a piece of the old stage standing and a few remnants of the thick velvet curtain hung from the ceiling. Behind it, she could see the bars of an old cage.

Ezobel shuddered. Could that be the same cage? Without much thought, she climbed onto the stage and pulled the curtain back as much as possible. The square box full of bars looked intact. Instinctively she ran her fingers along the corner bar. There it was; a small carving edged into the metal. It was indeed the same.

You shouldn’t be here Ezobel! The voice in her head was pretty much screaming now. Her heart began racing fast and her breathing quickened. This was a mistake. But it was too late. She was already there and it was starting to happen. She’d gone past the point of no return.

A thick drop of sweat travelled down her face and landed on the dusty wooden floor. The sound of the drop almost knocked her off balance. Damn it! The change always made her hearing extra sensitive for a few minutes. She had forgotten, but it was all rushing back to her: The heat, the sweat, the nausea, the heightened senses… Her skin turned goose bumps and she felt her bones begin to break.

The memories of all the years of changing for an audience filled her brain to the point of migraine. “No!” she yelled at herself. But the pain became unbearable. Suddenly she was eight years old again. Dr. Dracus was presenting her to the crowd. “Behold,” he said pointing towards her cage, his ugly face forcing her into a panic. Fear always made her turn.

The bones in her back cracked and her skin parted in a large gash. An extra set of arms and hands emerged from the gash, elongating until they were bigger than her height. The new fingers stretched and a fold of skin grew over them, creating a membrane. Her skin crawled, and where there used to be hair, shiny blue-green scales began to form. In her panic, she screamed, but instead of sound, from her mouth spewed forth a stream of fire.

The smell of smoke memory rushed into her brain. It was happening again. She would burn down the den again. Why did I come here?

A wall of fire rose up around her. The heat felt good against her scaly flesh. A rush of adrenaline filled her blood as her nostrils caught a sulfurous scent. There is another!

An image from her dream flashed in front of her eyes. A second cage. Yes. She remembered now. There had been another cage that night, an older female. Ezobel closed her eyes and pictured the old woman with the fiery eyes. She had been so serene during the whole thing. Like she had been enjoying it.

She searched the back of the stage and found it. A larger cage was clearly visible beneath a dirty tarp. Her gasp spewed forth more flames and the tarp caught fire. The entire backstage became alight and from behind the burning tarp, Ezobel heard a crack. She pushed the flaming cover aside and smiled.

The tiny creature shook the pieces of shell off of its back, cooed like a pigeon, and let out a smoky sigh, climbing onto her shoulders. “Guess it really was a dragon’s den after all.” 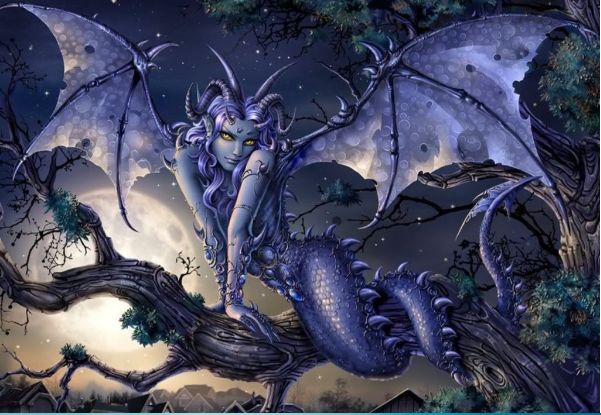