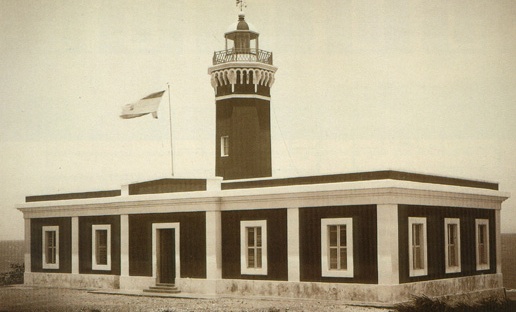 Two walls and a foundation are the only thing left of the original Aguadilla Lighthouse. Designed by Enrique Gadea and built by Pedro Tolosa on the northwest corner of Puerto Rico known as Punta Borinquen, the lighthouse inaugurated on September 15th 1889. It was located near the territory of what later became Borinquen Field, a major US military facility, later renamed Ramey Air Force Base.

Although used for over two decades, by 1911 there was discontent with its appearance and a request for funds to tear down the existing structure and build a new one was put forth. Unfortunately, in 1918, before building the new one, an earthquake caused considerable damage to the structure and it was declared unsafe and left abandoned.

The tall windows and Spanish construction is still visible in the structure. Red bricks under the plaster, corroded and carved by the ocean; a piece of history standing. I like them. And it just so happens, they’re right by the entrance to a well-known surf beach so you get historical and sporty pic opportunities all in one! Hope you like the pics.

This is the view from the surfing spot.

Now I see you!

One thought on “The Ruins @ Wilderness, Aguadilla, Puerto Rico (aka: Las Ruinas, Wildo)”